There are few parts of modern life that technology hasn’t impeded on, and driving is no exception. At its core, driving requires a range of skills, including hand eye coordination, hazard perception, concentration and awareness, but technology is slowly eroding the need for such skills. What once was a boastful skill is fast becoming autonomous thanks to technology advancements within the sector, but how exactly is driving being impacted by technology, and what will the future hold?

Many older drivers are experts in reading maps and have a great sense of direction, but this is something that is fast becoming redundant as navigating whilst driving is now more about GPS and less about paper maps and road signs. Most online maps factor in road closures and traffic, resulting in faster alternative routes when necessary. The majority of brand new cars come with a GPS built in, so there’s no need to buy a separate GPS system. Whilst this is handy, a lot of newer drivers lack the sense of direction older drivers have, and this is just the first way technology has changed driving.

One of the most important factors of driving is hazard perception and awareness, but as time goes on, drivers are needing to rely on their senses less and less. It’s extremely common for cars to come with parking sensors pre-installed at the front and back, taking away the need for drivers to look all around them because if they get too close to an object or a person, they will be instantly alerted. In addition to sensors, a lot of cars also feature rearview cameras so drivers can see what is immediately behind them without actually having to look or worry about blind spots. This is extremely handy for parking and for a lot of people has taken the anxiety out of getting into tight spaces, but it begs the question, when the sensors are taken away, will drivers retain their sense of awareness?

Speaking of parking, technology has heavily changed how car parks operate. It used to be that ticket wardens would come round and ticket cars that were parked without permission, but the need for car park wardens has dwindled as a result of the introduction of ANPR. It’s increasingly common for car parks to have cameras that automatically register a car’s number plate and track how long it’s parked for. This is something to keep in mind next time you’re thinking of parking without buying a ticket. 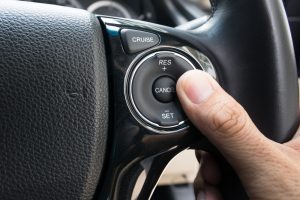 Gone are the days when drivers had to have their foot on the accelerator for the duration of their journey. Instead, most cars now feature cruise control. This means drivers can select a speed and the car will automatically maintain that speed until the driver takes manual control back. Typically, cruise control goes hand in hand with automatic transmission cars that don’t have a clutch, but it’s becoming more common on manual cars, too. Cruise control is a great tool for long journeys on highways and motorways and gives a welcome reprieve to driver’s feet.

Perhaps the most noticeable way technology has impacted driving is in the way of comfort. Cars are no longer metal boxes on wheels and instead feature a whole host of mod-cons to make drivers and passengers feel at ease. From heated, reclining seats to mood lighting and media players, cars are now feats of technology. Most brand new cars have screens of some sort and are compatible with smartphones, enabling drivers to sync contacts, take calls and play personal playlists, all without the need for cables or separate accessories.

With the increase in electric car manufacturing, it’s inevitable that technology will continue to evolve and change the world of driving.